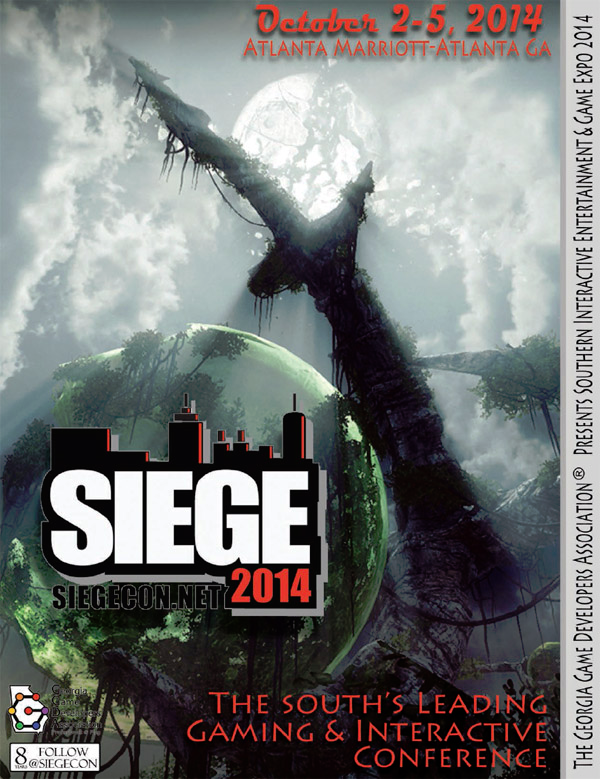 I knew I’d be blogging about SIEGE this year, and while mulling it over, I realized that the subtext would be “You can’t judge a book by it’s cover”. Soon after that though I realized it wasn’t subtext, it was the whole point, so why hide it in subtext. I now present a series of fortunate events that all have that theme in common. (No names will be mentioned but I won’t be working too hard to keep the identitys secret either. Hey, I’m a puzzle guy, for extra credit, you can probably figure out the specific individuals).

This will be long and rambling…I warn you now.

The Cover Art is from Lichdom by Xaviant. That’s a Fantasy RPG by one of the local powerhouses and it couldn’t be further from how I make a living in Games. I’m a puzzle guy and I don’t do MMOs, RPGs or FPSs either. And although that image is made to appeal to people who love those genres, SIEGE is always so much more.

A couple weeks before SIEGE, I was at a meet-up and a few people from a local startup arrived looking to get involved in the local Games community. The power exec in this group looked like a Soccer Mom from a distance but she was definitely a mover and shaker and reminded me of my days when I worked for the big guys at AOL and some of the other power execs I’ve met in the past. I believe that her and the startup will be a force to be reckoned with soon. I told them they had to come to SIEGE and they did indeed show up (at least 5 of them).

I attended my 3rd Game Jam a week ago at SPSU. My first Jam a few years ago was a disappointment and I did not stay. My 2nd Game Jam was at SPSU this summer and it was where I met this guy who I’ll call “The Kid” (although it might have been a meet-up prior to the Jam). So, this kid is both younger and older than he appears. It’s a neat trick. He appears to have some excellent programming skills and he already has the drive you need to succeed in this business. I often forget he’s still in high school and mentally think of him as just about graduating from SPSU age. His only fault is that he’s a little too “nice” (I think he’s been taught to respect his elders.)

I’m sitting in the investment conference and a guy, who I’ve not met, from Soccer Mom’s company comes up…and says Hi, and I say Hi back and “I’m Joe”. I’m wearing my Puzzles By Joe shirt and this guy who I don’t know starts going on about how I’m “the Joe” that he’s heard about and he somehow thinks I’m “the Man”. Now, all I did, was connect up the Soccer Mom with SIEGE’s main man and now I have someone thinking I’m much more important/connected than I really am. It was awesome. It was like I was “The man behind the man behind the man”. (extra points for anyone who knows what David Mamet movie that’s in).

Event 5: Magilla Gorilla,  the Unicorn and Me

I can’t say much about these two people, but they continue to surprise me. Both are exceptionally nice and fun to be around and both will be helping me to grow Puzzles By Joe. As for me, when I’m around these two and working on my games I’m transformed back to their age and my mental image is of a young, skinny, quick guy with a basketball in one hand and a Rubik’s cube in the other ready to take on any challenge. (But of course, I’m still that old, fat, slow guy with a Rubik’s cube in his pocket willing to bore anyone with stories of his youth, yet still quite impressive with the cube). They both surprised me by showing up at SIEGE.

Last year, I did not stay for the SIEGE parties and I regretted it a bit. This year, I rented a Hotel and made the executive Puzzles By Joe decision to stay. My wife wasn’t originally happy with that decision since we live just 20 minutes away. I had also made up my mind that Ana would come with me to the parties. Of course, there is a difference between me making up my mind about something and that something happening. Ana showed some resistance and some of that was because of her attending prior meet-ups that were at least a little bit boring from her perspective. But, she decided to come for at least Party #1. Party #1 was loud, not easy to really talk to each other and we only met a few of the friends I wanted her to meet. We stayed for a few hours and crashed. I didn’t think she’d come back for Party #2. (But again, I was wrong). (Food, and free drinks were excellent though.)

Here’s a whole game built around not judging a book by it’s cover. It’s by a guy named Britt Briscoe (there are others involved but he’s the one I mainly associate it with). It’s brilliant and has recently been Steam Greenlit. It came out of a game jam at SPSU a couple of years ago. Basically, Default Dan is a Mario side-scroller with the rules reversed. Things that are good in Mario, like Coins, Kill You in Default Dan. I won’t say more, it’s an awesome experience…and it was available in the SIEGE Expo area in a Video Cabinet no less.

My Hero was back in town and he co-hosted one of the suite parties. I met him a few years back and immediately put him in the “doers” box. Like most communities, the Atlanta Game Community has “doers” and “talkers”. My main advice to people graduating and trying to “break-in” to the games industry is to complete something (and hopefully more than one thing). By completing something, you immediately distinguish yourself as a “doer” instead of a “talker”. And everyone talks, but only a small percent do, and they are the useful/successful people. I can’t go into more detail but My Hero continues to astonish me with where his career is heading and he never ever brags about it (like I would). Nicest guy in the world, and he even indulged my Cube obsession for a bit.

A long-haired hippy freak (like from the song Signs), who is currently masquerading as a clean cut Don Draper type (ie. “the Establishment”)…was the only one who completely busted my chops in front of my wife. I thought it was great.

A Serious Gamer who’s also a Serious Gamer (she takes Cosplay to an extreme level), was nice, funny and the most relaxed that I’ve seen her. It was nice to chat with her for a bit.

Another Serious Gamer proved once again how Non-Serious he can be in the right circumstances. He’s one of the “power-people” I’ve kept my eyes on for the past few years and it’s always interesting hearing what his company is up to.

I got to see some really great “pretentious Indie Games” by people that sounded just like the way “pretentious indies” talk about art as games, etc…but…not one of them seemed the least bit pretentious. Who’d a thunk it? It was truly amazing.

The Lawyer panel on original-IP was so scary, warning us about everything. And if you tried to get them to answer a simple question, simply…they didn’t. Every new answer scared me more, until an Old Lawyer in the audience spoke up and then it was much less scary. Oh, and of course, as soon as the talk was over, “The Lawyers” morphed into the nicest, smartest, funniest people you’d ever want to meet. And I mean that truthfully, not in a mocking way.

Event 9: Another Pretentious Indie, who wasn’t

I don’t want to give this one away in that I don’t want to insult this guy on any level because he was awesome. What I will say is that I, 100%, misjudged this guy and he inspired this blog more than any other. If I watch him from a distance, and see his passion, and his project, and the way he looks and the way he talks about it and that he views it as “art”…I see “Pretentious Indie”. (And the worst kind of Pretentious Indie.) But I ended up having a 5 minute one-on-one conversation with him, and if I had closed my eyes, I would swear I was talking to a modern version of Don Draper. Smart, focused, business-oriented and still passionate about that, the business side of things. It was an eye-opener for me.

The Final Chapter: That Vampire Guy

I couldn’t hide this guy’s identity if I tried. Four years ago, I moved to the Atlanta area and began going to the meet-ups. That Vampire Guy was the first person to remember my name and genuinely seemed interested in what I was up to from month to month. I didn’t know he was That Vampire Guy until a while later and at about the same time I started thinking of him as “The Man” when it comes to Games in Georgia. There were other movers and shakers, but if you wanted to know something about anything Game related in Georgia…he was “The Man” to ask. But, of course, I preferred “That Vampire Guy” to “The Man”…so even while trying to get Ana to agree to come to the parties, I would say things like “Hey, you’ll finally get to meet (insert his real name here)” and she’d say “Who?”…and I’d say “That Vampire Guy”…and she’s say: “Oh yeah, right.”

What’s interesting to me about “That Vampire Guy”…is he’s also a great example of not judging a book by it’s cover. I mean really, how can he be “That Vampire Guy” when 1. I’ve seen him in broad daylight.  2. His cane doesn’t have a wolf’s head on it. 3. He doesn’t normally sparkle (unless he’s telling a story about the old days in gaming). and finally….4. He’s the only Vampire I know who gives Blood instead of taking it. He continually injects his life’s Blood into every facet of the games business here in Georgia, and although I’ve only been here for 4 years now, it appears he’s been doing it for much longer than that. And we’re all the better for it. Thank you.

It was one heck of a SIEGE. Already looking forward to next year’s.

Ana’s one of a kind, hand-altered pottery has to be seen to be believed. She always has something for sale in her online shop.