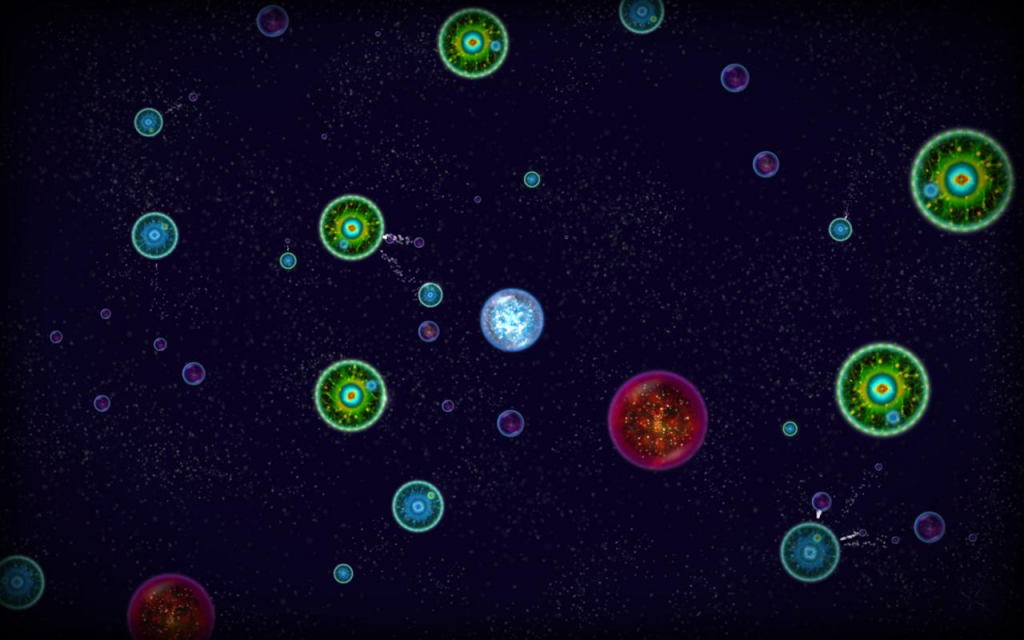 That picture is a game called Osmos (It’s awesome). It spawned many similar games including a fairly popular MMO called “Agar.IO”.  The rules/physics are simple. You are one of the colored-globes (all other globes are colored based on size….Green if smaller than you, Red if bigger than you). As you move, your Globe becomes slightly smaller (as you expel Gas in the opposite direction you move).  If you come in contact with something “Bigger” than you…you die….however, if you come in contact with something smaller than you, you absorb them and become “bigger”.

I want to create a game that’s a metaphor for several “themes” that I see having to do with diversity, culture, privilege, individual vs. society, fitting-in, happiness, enlightenment etc…

I want a game that is similar to Osmosis (but instead of absorbing…you are “affected” by other Globes). Your globe is multi-colored concentric rings….with the center area being your “inner light”.  The other rings are “labels” that “define you”…but at least one goal of the game is to get your “inner light” to shine through all your layers (so that the labels in effect disappear (no longer apply)). All your inner-labels are really “attachments” that keep you from “transcending”.

Although it will never be stated in the game….the different layers will be a metaphor for

At least one “goal” of the game….is to “CHOOSE” to interact with Globes outside your “comfort zone”….enough to not be “hardened” by just hanging around your own “group” for too long.

Lastly…I want to work in a “numbers” thing to hopefully model privilege on some level. Without bias, some of the external-rings-colors will outnumber other colors. (which colors outnumber other colors will be randomized each game (after you pick your “starting” globe (and/or your parent’s starting globe)). This out-numbering will be an advantage for at least the first half of the game (when the out-numbering is so severe that one color is more prominent than all other colors combined….but…as the game progresses, the out-numbering gets less and less…until it’s no longer the “majority”).

I’ve also thought about doing the whole game and calling it “Tipping Point”…and focused more on just this outnumbering change…but it may just be a “Mission type” that you can choose (if I think of other missions) at the start of a game.

I think of this as possibly an Orthogonal Osmos. Instead of one characteristic (Size) we have….Color – specifically R, G and B. Three independent shells. Brighter Colors Dominate (and drain (over time) objects that are “near-enough”). Totally “drained” objects…die, while totally Bright objects….Transcend (in a white light…or they move towards the light).

Could even try a “Grid Based” (Like Life)….version of this…where you make one-move at a time. (and everyone else also moves at the same time). Move, Resolve, Move Resolve. For the real-time version it would be good to use a gradient of the full 256…but….for Grid Based maybe 5-9 gradients would be useful.

It also might be interesting to have a flag….where…your Concentric Cirlce….is either 3 separate color areas….or the whole sphere is the combined color.

I think this version is worthwhile to get up and running….just to play around with (then later on, I’ll worry about the metaphor).

Below is my original brain-dump on this.

Let’s call it “Groups” or “Stereotypes” or “Choices” or “Flocking”
(The longer you’re with a “group” the more you become “like” them…but you can
earn points to “choose” to be less like them). But it takes more “energy” to move
away from Groups you’re associated with….but it’s Better.

Concentric Circles….at least 3-4 that “define” who you are.
Color Based and/or Transcendant.

Aura around people that can “see” them…(is just your inner colors shinging outward).

Start by picking your parents…..and Historically Postive and Negative.

“Authors” area….non-physically present….but once you go to “library” and are influenced
by them…you “carry” around with you them.

Anti-social ones that “push” you around.

click on “someone” else to decide how much/little they influence you.
click on “self” for hints/clues/advice and to check your own happiness levels.
Food/Energy source…….(and how it affects you).
Sleep/Recharge Mode as well. (Home/House) (Abstract).
Alcohol ???

Simulation with a goal.

Local vs. Global percentage of “people”/types.