Clutter V: Welcome To Clutterville is the best of the series yet.

Here’s a brief list of some of its features:

Almost All New Objects!!! All New Music (even the Win Music)!!! Longest and Hardest Quest Ever!!! Many Many New Options!!!
Just to name a few of the many options:

Continue where you left off. e”X”it from anywhere (when option is set). Remove Letters and Puzzle Pieces. Remove Click Penalty.
It's the history of Clutter games and tries to answer the question, "Why is Joe doing a Clutter V, and will there be a Clutter VI?"

Yes, it's the scariest Clutter yet.

Buy Welcome to Clutterville for $10 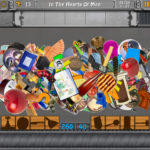 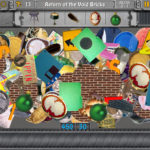 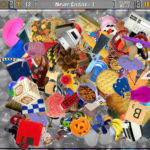 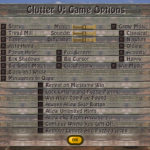 Clutter V is another outing of the Clutter series which immerses you in mounds of jumbled items to claw your way through! I thought Clutter IV was the best ever, but this one tops it. Fast, furious and filled with hours of frustrating fun! Find yourself in the hidden objects as you search for matches!!!
One would think that after playing and owning 4 Clutter games one would have enough. But the strange thing is that, the same as in Clutter 3, the game sucks me in. It is not just the gameplay, but it is the game maker who speaks to the gameplayer in quotes and confessions , a little bit clouded in mystery. It makes me want to know the whole story and I want to get to know the game maker and that I even slightly feel in love with the game maker.
Get bored when too many series of a game come out, but not with Joe so far. My favorites in the series is the story about Joe himself and the variety puzzles (still playing that one). If you don't know this series, give it a try, don't want to spoil anything so all I will say is match pairs in a time limit and variety of puzzles with a great story line. Can't be perfect at everything although Joe sure tries, can't wait for VI to come out, and I haven't even played this one out.
A breath of fresh air. After playing all of those heavy HO games and keeping up with the storyline and finding the morphing objects and collectibles - this game is wonderful. The developer tells you little stories and there are so many ways to customize this game. I have never seen anything like this. It's hidden objects with a delightful twist. They also have some interesting mini games. What a terrific break.
What is with these Clutter games? They are absolutely heinous, the frenetic music is enough to crack the most hardened player, and the visuals make you blind...BUT... I - must - have - it!! (Insert zombie face here)

Once I start to play I cannot stop. I've stayed up way late into the night...it's hideously addictive.

I have them all, but this one looks to be the best. There are a lot of avenues to explore, but you have to start with the gold mine section, and as I stopped to buy it, then write this review, I have no idea yet where the other caves may lead.

I probably won't see the light of day for the next week!

Love those sliding puzzles, too.