Clutter II: He Said, She Said

Clutter II: He Said, She Said

Clutter II is a lot like the Original Clutter but it's quite different as well.

There is still a main quest and 5 Minigames and just about everything is replayable.

In addition to all the variations from Original Clutter; Dragging, Close Counts and Stockpile Challenges are here.

And it's still really, really addicting!!!
Clutter II has 5 Minigames as well. Sliders and Memory return but with new variations. There is also Rack'Em, Plates, and the infuriating #15. Still a little something for everyone. And if you don’t like a particular Minigame, you may skip them if you want.

And this is the game where the Timer & Treadmill became optional. And the Minigames, are easy to skip over.
At the end of Clutter we left with Leon meeting Ana at the foot of the Christ the Redeemer statue in Rio.

Ana joins as co-host as they discuss all the different things you can enjoy in life and whether or not you need to enjoy all the things your partner does.

Nothing too heavy and you'll find more inspirational quotes to enjoy as you play. 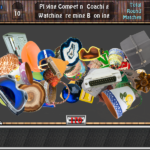 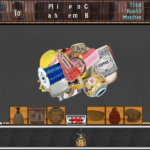 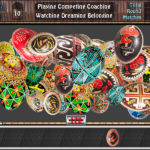 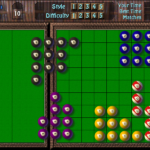 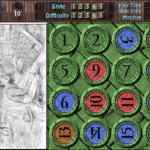 I loved Clutter. This game was so fun that I could not stop playing it. It is a great "go to" game when I need to just focus and do something different.

When I learned Clutter II was in the works, I was so excited. This game was worth the wait.

The games in Clutter II are similar to those found in the first game, but there are more options available to customize the play. This makes the game truly delightful to play.

The graphics are sharp and the game is a great challenge for the mind. It is just different enough that it stands out from regular puzzle games.
A Joyful Jaunt through a Junkpile Jungle This is one game where junk piles are a necessary part of the game. Clutter 2 is far and away much better than the first game. The gamer has more control of its environment, you can play with or without a timer, turn off hints, and pretty much setup how you want to play the game.

The purpose of the game, is to learn to de-clutter the ordinary things in your life.... but this game does more for me than just gameplay, it relieves stress, makes me laugh, and teaches how to focus on the task at hand.

it is a Joyful Jaunt through a Junkpile Jungle...... at least that is one man's opinion
I really liked the first game, complete with all of the decluttering tips. This game is just as good, if not better. You get the option of turning off the timer, for one thing. This reduced the stress level of running out of time, but kept me from getting that feeling of accomplishment when I finally beat the timer and passed the level. (I'll play it both ways eventually.) Another option in this second game is adjusting the speed of the conveyor belt. I haven't tried that option yet, but may have to later on in the game.

I like the mini-games, especially the Window Blinds one, which carried over from the first game. The clock mini-game from the first Clutter (extremely difficult for me) was replaced with a 15 numbers game (also, unfortunately, very difficult for me). I own both games and enjoy playing them when I have a short amount of time to spend relaxing and don't want to get into a complicated Nancy Drew game for just a few minutes.

I'd have to say the story in Clutter was better and more interesting, but there are photos of Leon and Ana's house in Clutter II: He Said, She Said which give it a more personal touch.

All in all, it's a very good game. Kudos to the developer.
I cannot stop playing this!! like the ultimate hidden-object challenge. and it is not just a one-play game. you could play this for years and it would never get old.
I had a dilemma .. I could choose only ONE game. Which would would it be?

Hours of wandering around spooky castles in fairy-tale kingdoms? Looking for demons or ghosts and saving stolen children? Engrossing story lines? Mind-boggling graphics? .. or this.

And I chose THIS!

This is the daftest, simplest, most inane game ever! .. BUT I ABSOLUTELY LOVE IT!

Watch out though .. it's thoroughly addictive.