I fully believe that if anyone plays Clutter 1000 long enough, they will figure out what everything means in the game. Although there is no text in the game beyond Hello, Goodbye, Thank You and the Credits Screen, there is a story, and all the icons have meaning. Some are obvious and some less so. The “story” is told in pictures throughout, and it’s more about unifying themes than it is a linear story. But the story/unifying themes have a point to them, and I’ll talk a little about those as well, towards the bottom of this page. Although I don’t believe this page is necessary, I’m providing it to answer questions and/or settle debates over what each and everything in the game “means” and/or what its original intent was. But one of the subtexts of the game, is that meaning is something we ascribe to something, and although we often try to put it into words, it’s real meaning goes beyond words.

If you’re frustrated and want to figure out something right now, then read on. But if you’re still progressing through the game, I believe that over time you’ll figure everything out and you can always come back to this page later. Either way, as with all my Clutter games, that choice is left up to you, the player.

Last note before we get started. Most of the options from the previous game are in this game but they are not in a typical Options Screen. Most of them are bright green controls that show up prior to clicking in any level. There is even a master control (bright green check) in the upper left that controls all the other controls. None of these options/controls can do any harm, so experiment with them and see what each one does. You can control the Sound Volume, Music Volume, Timer, Treadmill, Mouse Cursor, Hints, and even the Difficulty of the game is controlled by these. The game is meant to be explored. Enjoy!!!

So first up, are the numbers. The numbers tell you about the fundamental matching that’s going on in a level. As with most of the icons, some of them are easier to interpret than others. There are also some subtleties about the different styles of matching that I’ll point out when appropriate.

These are the collections, and most are obvious. I think of them as Smileys, Chocolates, Dogs, Cats, Icons, Shoes, Round, Butterflies, Flowers, Hard Buttons, Plastic Buttons, and All Buttons respectively. It’s worth noting that each Collection has its own set of “almost the same but not quite” objects. Throughout the course of development, I would remove (mostly) what I felt were unfair, too-close objects but not always. The Smileys are great just because of all the near misses (even though I removed 3), and I left most of the near misses in the Cats because I felt it makes the Cats the most difficult of the collections.

These are all the Color variations in the game. I really don’t have meaningful names for them other than RGB and Not-RGB, etc…so, in order, here they are. RGB, Not-RGB, All, B&W, Negative Thinking, Solid-Silhouette, RGB-Silhouette, All-Silhouette. Although intimidating at first, I try to make sure that these are used sparingly (in fact, I’m not sure all are actually used in Clutter 1000).

These are all the “Basic Variations”. When present, they represent a basic modification to the objects and/or the match properties.

These are some of the bigger modifications to the whole gameplay style of the level. Bigger than the basic variations.

These are all the specialty puzzles that let you pick up Hint Gems more easily. Most will give you a couple Hint Gems per match. I think of these as Lines, 2-Circles, 3-Circles, Off-Circles, and Flats, respectively.

These are all the picture-based puzzles. The Sliders are an easy way to pick up extra Hint Gems. I also like the Clutter Picture Puzzles as just a fun way to put together the Collages (within the quest) and any picture outside the main quest. Outside the main quest the Green Arrows (up by the Pause Button) can be used to cycle through all 100 pictures that come with the game. The Clutter Picture Puzzles come in many levels of difficulty by messing with rotation, color of border, and combining the Square & Round versions.

In the quest only, these show up to mark the difficulty. They are self-explanatory. The Evil Smiley (that’s the name I call him by) can also show up as an icon of its own, usually to denote a puzzle with a lot of near matches, but not a Close Counts level — a sort of Close Does Not Count level. You may disagree with some of my rankings, but if you find an easy level (1 or 2) that you think is really hard, it usually means there is a strategy you’re missing (for instance, in most Outside-In levels, it’s easier if you don’t attempt to drag at all).

The dreaded Status/Hint Gems, and what does that yellow star mean? So, last question first. The yellow-stars are provided as a way for a player to mark a level as one of their favorites. That’s it. It’s just so that the player can see that level marked in the Choose Level (10×10 grid) area. The status lights used to be more like the “lights” in the prior games, but I started liking the Hint Gems so much, I decided that they could do double-duty and then I liked that because many things in life have more than one meaning. Within a level, the Hint Gems are just Hint Gems. You collect five within a level to earn one hint. They only appear in Clutter levels, if you don’t have Unlimited Hints turned on (see below about the Infinity Symbols). But, they are also used as your status as described here. 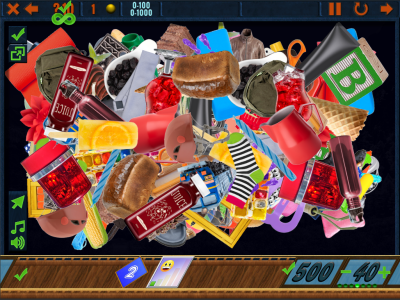 So there is not an Options Screen in the game, like the previous Clutters, but that does not mean there are no options. Although a little odd, let’s work our way from the lower right to the left and then up.  Here are the options, what I call them, and what they do. All the options go away as soon as the player makes their first click in the level. 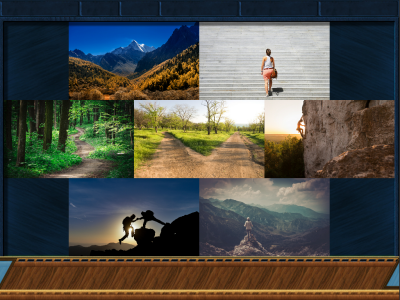 Although there is no text, there is most definitely a story. There is something being communicated in snippets, using pictures. Each of the pictures were picked to add to this story. Although it’s not always a linear story, there is definitely a unifying theme, and each of the 11 areas (9 puzzles each) is about something, which is then highlighted in the final collage puzzle. I’m not going to try to explain all the 11 areas and/or what the overall point we were going for is…in fact, part of what we were going for…is for you, the player to decide what meaning(s) there is to be found there. I will, though, tell you how I think of the first 7 pictures. For me, I wanted to represent “The Quest” (which is what I think of as the 100 puzzles) in general. So here are the 7 picture titles (in my mind): 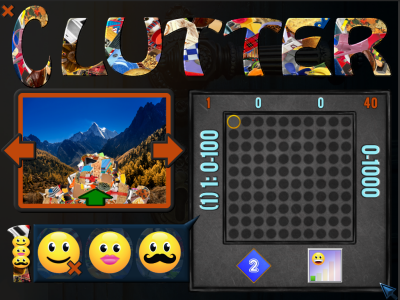 Because there is no text in the game, providing a way to choose a second or third player profile was a little tricky. I tried to make it a little puzzle-like, but also obvious if someone stumbled across it. It’s actually pretty simple. The “1” on the main menu is the only alphanumeric that isn’t part of a 10×10, 100 level area. The C brings you to the Quest, the R to a Picture-Puzzle based Quest, and the rest are just areas with different themes (the 3 “O”s are Mah Jong influenced for instance). So, I stuck 3 Smileys on the 1 to hopefully signal that it was different.

To delete the current player statistics, click on the X.  The first time you click on the X, it will move to the middle of the Smiley and get slightly bigger, and the 10×10 grid will fade out slightly. This is a clue that you’re about to do something important with no undo. If you click the X a second time, all your scores for that player only will be reset.

This was the easiest way I thought of to let you have more than one player profile and also provide an easy way to reset your scores and start over (if that’s what you want to do).